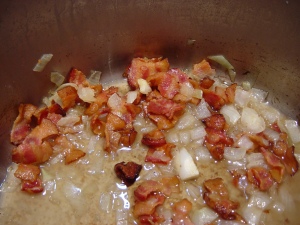 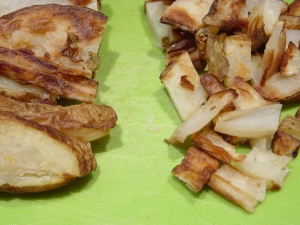 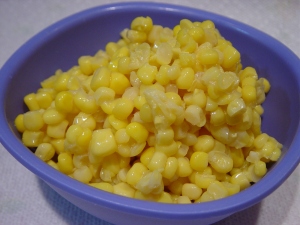 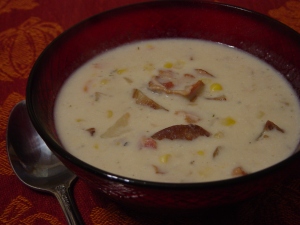 1. Place the bacon in a large pot over medium-high heat, and cook until crisp. Reserving about 2 tablespoons of bacon drippings in the pot, remove and drain bacon on paper towels, when cooled, crumble and set aside.
2. Chop onion and put into the pot with the reserved bacon drippings. Cook and stir 5 minutes or until tender. Add flour to form a paste while stirring with a wooden spoon. Then slowly pour in chicken broth one cup at a time, thickening the soup as you continue to stir. Soup should end up liquidy after all 4 cups are in. Continue to stir.
3. In the meantime, dice the cooled (skinned or with the skins on) baked potatoes. Put diced potatoes, drained corn and crumbled bacon back in the pot.
4. Bring to a boil; reduce heat to low, and cover pot. Simmer 10 minutes, stirring frequently.
5. Add the half-and-half to the soup and continue cooking until it bubbles. Remove from heat and serve immediately.
6. Enjoy! – What a trio, bacon, corn and potatoooo!

A lot of us are thinking twice about where our money is going during this challenging economy. I sure do, especially before running to the grocery store. Instead, I’ve resorted to looking into what I already have hiding in my fridge and freezer!

For years, I was used to cooking for a family of five. Now it is just the two of us and I still cook for five. What I’m happily discovering is that there’s always something in the freezer for dinner in an emergency. My number one frozen food is homemade chicken soup. My husband was on a roll for awhile and was baking a whole chicken on the grill about once a week. Every time he baked a chicken, I would make chicken soup – hence, a lot of frozen soup.

So, the other day I came home from work and there was nothing for dinner. I rummaged around in the refrigerator and discovered a half pound of uncooked bacon, half and half, onions and leftover baked potato wedges. I thought about all that homemade chicken broth sitting in the freezer. Next, I poked my head in the closet where I stored canned goods and spied a lonely can of corn. All the ingredients needed for making hearty corn chowder were right at my fingertips. Who knew!! The only thing I would have added to the chowder were was another can of corn, but I didn’t have that second can in the house and there was no stopping me, so I made due with one can. Chowder recipes usually call for raw, peeled potato cubes instead of the cooked baked potatoes I used. However, using the baked potatoes proved to be a smart move because not only did I use up the leftover baked potatoes, but the chowder took even less time to prepare. Adaptation is what it is all about. Sometimes, you just gotta wing it!

Open your freezer and refrigerator right now. What do you see? I see an interesting meal waiting to be created. Don’t be afraid to use your imagination. See beyond the printed recipe and have some fun. Enjoy cooking!

Somebody's Mom met Martha Stewart. I was invited to an event at her offices in Manhattan. My friend, Patti, came along. We were working the room of about 200 people, trying to give my card out. When all of sudden, who is standing in front of me, but Martha Stewart herself. She looks fantastic. I introduced myself and told her how I was invited, (through the Macy’s cooking demo) and handed her my card. I forgot I had a camera with me and asked if I could take a picture with her. She said I could, and was so nice about it. Just as she was about to leave, I told her I brought her my sour cream coffee cake. She took it. Martha Stewart may actually taste my sour cream coffee cake. After that I was done, this was enough excitement for one night. Patti and I left to head home. As we were getting into the elevator, Patti whispered to me, "Hold the door, hold the door!" Who walks into the elevator with us, but Martha Stewart! She asked if we enjoyed the event while taking the elevator down with us. Martha and me, we bonded together for 9 floors and then she was gone. Maybe we will meet again. Hey, you never know! Thanks, Martha, it was fun!
© Somebodys-Mom.com
Website support by PathwayWebDesigns.com
Loading Comments...
%d bloggers like this: