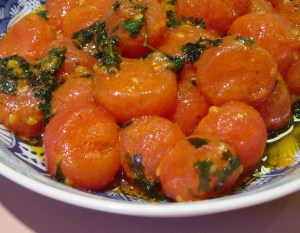 1. Remove stems from tomatoes. Rinse tomatoes and set aside.
2. Boil water in a medium pot. Drop tomatoes in a few at a time. Boil
for 5 to 10 seconds, till skin loosens. Remove with a slotted spoon
and set aside for a few minutes to cool enough to handle.
3. Wash and chop parsley, set aside.
4. With a sharp-pointed knife, cut around each tomato and pull off
the skin.
5. Heat butter to bubbling in a medium frying pan. Put in peeled
tomatoes and shake around pan covering all sides with butter.
Toss in parsley with salt and pepper. Continue cooking a few more
minutes. Serve immediately.
6. Serves 4 to 6 people
7. ENJOY! – Buttered tomatoes are mmmm good!

I saw advertisements on TV and the papers about a new movie Julie & Julia, whose main theme is about Julia Child and Julie Powell. My interest was definitely peaked because of my love for cooking.

I had watched a few of Julia Child’s cooking shows several years ago before the movie premiered. Usually I am too busy cooking to take the time to watch cooking, but if I did occasionally watch cooking shows I would watch the Galloping Gourmet with Graham Kerr. I liked him and especially his enjoyment of his tasting the finished recipe with his glass of wine.

Since the movie opened, I started to look for Julia Child’s cookbooks at the library book sales I attend. Since I have so many books at home, that I have no room for, I really didn’t want to buy another book, if I didn’t have to. But somehow, buying a book at a library sale which benefits the library seems okay to me. I found two Julia Child paperback cookbooks for about 70 cents. You can’t beat that price. Unfortunately, neither one was The Art of Mastering French Cooking; however once I got home, I reviewed both books. No recipes in either book interested me. I do admit I began to read the forward in one book by Julia and began to like her from what I read. She sounded like a woman who could be your friend.

Maybe it is the French food that didn’t interest me, or the complicated steps it took to complete a recipe. Either way, I found this one recipe for cherry tomatoes, which I happened to have in the refrigerator already. I changed the recipe around, it isn’t Julia’s exactly. I had to compromise and make do with what I had on hand rather than the ingredients in the recipe. I served these tomatoes to my neighbors for dinner. All of us enjoyed the dish, but we felt like it should have been served around a roast as garnish. The next day, the tomatoes didn’t taste as good as when just served.

Anyway, I went to see the movie with my good friend, Mela, who is also my movie buddy. Right before my eyes my life being played out on the screen. There are definitely similarities between Julia and Julie and I. Julie lived in Queens above a pizza parlor. I grew up in Queens with the Long Island Railroad in my backyard and three factories on my block. Julie wrote a food blog. I write a food blog. Julie had a cat. I have 2 cats. Julia and Julie were secretaries, and I am still a secretary/office manager during the day. We all love to cook. We all had cooking mishaps. Julia and I were similar in that respect. I always laughed and did the best to correct a mistake in the kitchen. I never had a real melt down over cooking like Julie did. Not that I don’t have melt downs, I do, but never over cooking something. Julia and Julie were pearls all the time. I have my mother’s pearls that I only wear on special occasions. Julia Child gave cooking lessons, I gave cooking lessons.

Is it just me, but doesn’t anyone else see the connection I have with these 2 women. Maybe I should just change my name to Julimariann!

4 thoughts on “CHERRY TOMATOES WITH BUTTER”

Somebody's Mom met Martha Stewart. I was invited to an event at her offices in Manhattan. My friend, Patti, came along. We were working the room of about 200 people, trying to give my card out. When all of sudden, who is standing in front of me, but Martha Stewart herself. She looks fantastic. I introduced myself and told her how I was invited, (through the Macy’s cooking demo) and handed her my card. I forgot I had a camera with me and asked if I could take a picture with her. She said I could, and was so nice about it. Just as she was about to leave, I told her I brought her my sour cream coffee cake. She took it. Martha Stewart may actually taste my sour cream coffee cake. After that I was done, this was enough excitement for one night. Patti and I left to head home. As we were getting into the elevator, Patti whispered to me, "Hold the door, hold the door!" Who walks into the elevator with us, but Martha Stewart! She asked if we enjoyed the event while taking the elevator down with us. Martha and me, we bonded together for 9 floors and then she was gone. Maybe we will meet again. Hey, you never know! Thanks, Martha, it was fun!
© Somebodys-Mom.com
Website support by PathwayWebDesigns.com
Loading Comments...
%d bloggers like this: